Situated in the foot hills of Himalayas the Corbett forest reserve is the first Indian National Park established in 1936 under the name Hailey National Park and shifted to it's present name in 1957. The Project Tiger to save the national animal was started  in Corbett in1976.The area of Sonanadi WLS was added to the park in 1991.

Road : The route to Ramnagar,  where Corbett NP is situated is same

till Moradabad as for Nainital .Thereafter you can take the Moradabad bypass and take a U turn after the by pass to return to Kashipur turn to reach Ramnagar via Kashipur. You can also go thru Moradabad to reach the Kashipur mod about 6 km after the city. After Ramnagar, Dhikala the main part of the park can be reached via Dhangarhi gate, where the permit to enter can also be obtained. Ramnagar is about 50 km away from Naintal.

Rail : The nearest railhead from Corbett is Ramnagar which can be reached by a direct train from Delhi (Ranikhet Express).

Air: The nearest airport is at Pantnagar 50 km away.

The obvious thing to expect seeing in Corbett is of course is the Tiger, but you may return disappointed if you go for seeing only the Tiger. Corbett is about the tiger definately but not only about it. It presents an excellent plethora of varied flora and fauna in an equally varying topography from grasslands to marshes and ravines to plateaus along the riverbed of River Ramganga. Corbett vegetation consists of sal trees, bamboo and small shrubs and savanna like grass which grows very tall in the monsoon and immediately thereafter hindering a clear view of the jungle and thereby your chance of sighting a tiger. The chance of Tiger sightings go up in summers as the tall grass dries up, also as their are less water bodies available tigers and other animals can be seen around a water hole. The other animals which may be spotted are elephants usually found in herd along with the small ones,  Wild Boar, Leopard, Langur and Rhesus Monkey and varieties of deer like Sambhar, barking deer, hog deer and the common spotted deer.

The Ramganga river is full of crocdiles- the gharial and other fishes like mahaseer. You may see the gharials sun bathing on the river bank on a sunny afternoon.

For the bird lover the Corbett presents score of opportunities with over 500 species being recorded here including woodpeckers, raptors, fishing eagle, harriers, jungle fowl, cuckoos, drongos, barbets and minivets etc. For bird lists of Corbett and other information about birds visit  www.delhibird.org.

Elephant Safari  There are about 10 elephants in the park which take four adults at a time along with the mahout into the jungle for about 2 hours for a safari. The ride

provides a panoramic view of the Corbett jungle  with the tusker chugging along at it's own pace with you being swayed side to side atop it. The best time to go for the ride is early morning or at dusk, so book in advance as the demand for the rides is high. Speak as little as possible in the jungle as it increases your chance of spotting the wildlife and doesn't disturb the animals (remember you are in their home).

Jeep Safari You could take your own car into the jungle but we will suggest a jeep safari being run here unless you have a four wheel drive along with a forest guide. Compare to an elephant the jeep can cover long distances but it is more noisy.

Fishing  Fishing is not allowed within the park boundries but can be done at nearby Lohachur on the river Ramganga with permits available at Ramnagar.

Rafting This facility has been recently started at the Kosi and the Ramganga river and is available for 2 months only, around Monsoon time.

Excursion One can visit the Corbett Falls for a day picnic. It is situated on the road to Kaladhungi from Ramnagar and in it's full bloom after the monsoons. 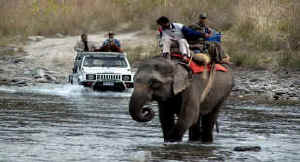